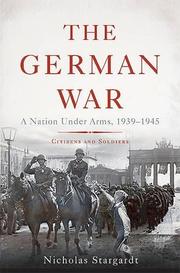 A Nation Under Arms

The story of World War II seen through the eyes of regular German citizens.

In this massive but thorough meditation, Stargardt (European History/Magdalen Coll., Oxford; Witnesses of War: Children’s Lives Under the Nazis, 2005, etc.) carefully avoids fixing blame on how the war affected both the attitudes and daily lives of German citizens. Instead, the author takes a studiously clinical approach to provide a contemporary perspective on how an entire nation rose up to follow Hitler into a war of conquest and genocide. In addition to providing greatly needed context to the central problem, Stargardt also examines the long-suppressed notion that the average German citizen was under the impression that Germany was fighting “a war of national defense, forced upon them by Allied machinations and Polish aggression.” Yet the author never denies that a significant majority of the population was well-aware of the atrocities being committed in their name. “Where other historians have highlighted the machinery of mass murder, and discussed why or how the Holocaust happened, I find myself more concerned with how German society received and assimilated this knowledge as accomplished fact,” he writes. “How did it affect Germans to gradually realize they were fighting a genocidal war?” Stargardt covers this historic arc in deliberative detail, but he also knows when to dive down from the macro level to focus closely on soldiers, civilians, commanders, and victims. The author has clearly drawn on a wealth of letters and documents written at the time, and when he punches a specific line or memory at the right time, it’s chilling. Near the end of the story, he finds eerie prescience in defeat from the late journalist Ursula von Kardorff: “And when the others [Allies] come with their boundless hatred and gruesome accusations, we will have to keep quiet because they are true.”

A well-researched, unsettling social history of war that will prove deeply thought-provoking—even worrying—for readers who wonder what they might have done under the same circumstances.