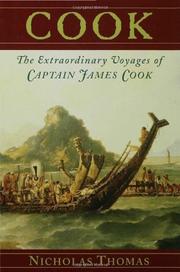 A richly detailed life of perhaps the greatest maritime explorer in history.

A partial life, that is: Thomas (Anthropology/Univ. of London; Colonialism’s Culture, not reviewed) shuns the “grandfather to grave” course of most biographies, beginning his study of the Yorkshire-born James Cook as he neared 40. By 1767, Cook was already an accomplished sailor and leader, driven by a keen desire to put points and lines on maps where none had existed before. As a surveyor, Thomas shows, Cook was nearly without peer, and his sea and coastal charts “produced a new kind of accurate knowledge that suddenly showed up his predecessors’ efforts for their amateurishness.” As Cook voyaged ever farther from England, now aboard the Endeavour, he added ethnographic skills to his quiver, thanks in some measure to the influence of his shipmate Joseph Banks; Thomas considers both to have been “embodiments of Enlightenment inquiry,” and both took care to record cultural, geographical, and natural-historical details in their journals and logs, even if they sometimes failed to record incidents that did not reflect well on the captain. We can only guess at those incidents, but some must have involved the deaths of native peoples. Though Cook had taken an interest in and even praised the lifeways of some of the indigenous peoples he encountered, he apparently had no qualms about raising his pistol; as Thomas notes, commenting on an account by a contemporary writer, “Cook’s excuse was, in effect, that you had to be there to see why this occurred . . . which was to beg the questions of whether civilized men were only civilized in civilized places, and whether their travels took them into situations beyond the scope of ethical and moral principles that were surely supposed to apply universally.” Thomas does well to sound that heart-of-darkness theme, which turns up at points throughout his narrative as Cook becomes ever gloomier about the enterprise of command and ever quicker to assert European, and his own, authority—behavior that surely contributed to his death at the hands of unimpressed Hawaiians in 1779.

All in all, a well-paced, nuanced contribution to the history of exploration.