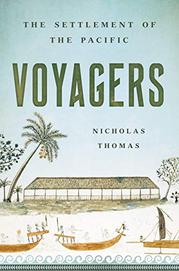 The Settlement of the Pacific

A scholarly survey of the current state of knowledge on the ancient peopling of Oceania.

Blending ethnohistory, archaeology, and linguistics, anthropologist Thomas asks the big questions about “a civilization that has seldom been recognized as such.” Who were its progenitors? Where did they come from? How did they accomplish such daring acts of navigation and exploration? To the first two questions, the author reaches far back into the past to study the dispersal of humans out of Africa and into Southeast Asia, from which protohominids such as Homo floresiensis, dubbed the “hobbit” for their short stature, fanned out into the islands of the South China Sea and what is now Indonesia. From Papua New Guinea, modern humans of the sapiens variety began to sail to nearby islands, usually keeping sight of land. The ancestors of the modern Polynesians, an Indigenous people who settled in what is now Taiwan, did them and the people of the Lapita culture one better. Using a sophisticated knowledge of the stars and the movement of ocean currents, they sailed all the way across the Pacific over generations. Thomas notes that in early encounters with Polynesians, European explorers theorized about their origins while marveling at the accomplishments of these sailors, concluding that “a single ‘great nation’ had dispersed itself across the vast ocean” because of the pronounced cultural continuities among the peoples who settled places as remote as Rapa Nui and New Zealand. Even so, as Thomas astutely observes, there were also profound differences. The Hawaiians developed a near-feudal royal system, for instance, “very different from the comparatively decentralized political forms that emerged in the Marquesas and among New Zealand Maori.” The author’s academic tone makes the book largely of interest to specialists, though his view that the Polynesians have long been “archipelago dwellers” well aware of their distant relatives on other atolls and high islands brings a welcome world-systems approach to Oceania, an understudied region.

Students of exploration and world cultures will find value here.