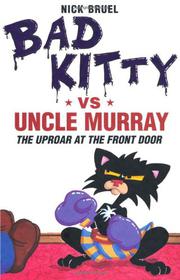 Waking from a dream of Pussycat Paradise, Bad Kitty learns her humans are going on a trip. Of course, they’ll bring her a surprise on their return. In the meantime, Uncle Murray will stay with Bad Kitty and Puppy. Puppy droolingly snuggles up to Uncle Murray, but in Bad Kitty’s overactive imagination Uncle Murray is a cat-eating ogre. She tries hiding from him, but he “finds her” every time (and she scares the bejesus out of him each time she spazzes). Bad Kitty finally escapes for a chase around the neighborhood. When it ends back at home, Uncle Murray’s had enough! Détente is achieved, and as usual Bad Kitty’s surprise on her people’s return is anything but a reward. Bruel’s third chapter-book–length Bad Kitty tale includes more pussycat hijinks and googly-eyed kitty freak-outs. Uncle Murray’s questions about cat fears are answered with actual facts, and a list of phobias follows in an appendix. A few lapses in the frenetic pace won’t keep fans from enjoying this and looking forward to the promised sequel. (Graphic hybrid fiction. 7-10)