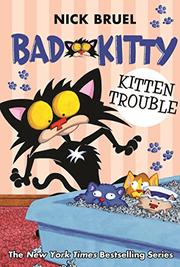 In the midst of Bad Kitty’s ongoing dust-up with the paper carrier (who routinely aims for Kitty’s head when he tosses the paper), Bad Kitty’s humans take in some unfamiliar kittens from a conflicted neighborhood nearby. Kitty’s having none of it—after all, Kitty doesn’t share (Uncle Murray here breaks in with series-trademark Fun Facts about feline territoriality). After Kitty shows her characteristic hostility to the refugees, her humans call Uncle Murray to come over to school Kitty in how to be nicer…but Kitty has so traumatized Murray in the past, he agrees that the kittens present a danger—they will grow up to become cats, after all. After a bad dream and time to reflect, Uncle Murray and Kitty come around and apologize to the kittens for their prejudice…and Kitty uses what she’s learned to befriend the paper carrier. As with other recent volumes in his popular series, Bruel uses goofy humor and his curmudgeonly cat character to take on a weighty issue. While Uncle Murray’s Fun Fact segments offer practical advice on introducing new cats to existing cats, Bad Kitty’s tale counsels tolerance and empathy when dealing with others.