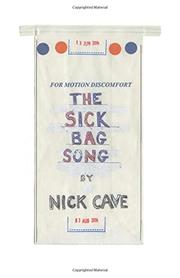 The gloomy Aussie rock star ponders the ways of the road in this blend of prose and poetry.

The sick bag: until the airlines decide to trim the cost, every seatback contains one. Constantly airborne but not prone to motion sickness, Cave (The Death of Bunny Munro, 2009) chose to use the device as an impromptu notebook to record a tour of 2014. “You must take the first step alone,” his guardian angel intoned as, packed into a van brought to a crawl on the highway by a decapitated accident victim, he tried to get some sleep. A few cities later, the author had a theme: a man at a German restaurant in Milwaukee served him “a pretzel big as a severed human head.” It’s not the most appetizing vision, but Cave’s sick bag becomes a medicine bundle of a kind, a storeroom of such images, to say nothing of books by Patti Smith and songs by Elvis Presley and company. The author hovers above the Platonic domains of beauty and ugliness, the former perhaps best represented by Roxy Music frontman Bryan Ferry, who waves his manicured hand across an idyllic English landscape and confesses to not having written a song in years, saying, “there is nothing to write about.” A devotee of grimmer venues, Cave surveys the loveliness of a Canadian river (“pleasant,” “faultless,” and “fabulous” are three of the glowing adjectives that come in quick succession) and then rushes back to the hotel to write a poem that begins, “I was born in a puddle of blood wanting everything.” Well, at least the head remains on the body. Along the way, Cave channels Allen Ginsberg (“Hop in my sick bag! All you wild Texas girls!”), casts a sideways look or two at rock-star fame and the music business, and generally amuses himself with bouquets of words.

Like Cave’s growling music, this book isn’t for everyone, but who doesn’t like the specter of “a gloop of ectoplasm spurting through the orange air”?