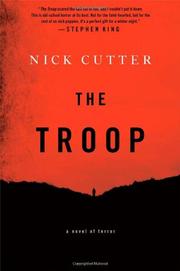 Some thrillers produce shivers, others trigger goose bumps; Cutter’s graphic offering will have readers jumping out of their skins.

Scoutmaster Dr. Tim Riggs takes his troop for their annual camping trip to Falstaff Island, an uninhabited area not far from their home on Prince Edward Island. The five 14-year-old boys who comprise Troop 52 are a diverse group: popular school jock, Kent, whose father is the chief of police; best friends Ephraim and Max, one the son of a petty thief who’s serving time in prison and the other the son of the coroner who also serves as the local taxidermist; Shelley, an odd loner with a creepy proclivity for animal torture and touching girls’ hair; and Newton, the overweight nerdy kid who’s the butt of the other boys’ jokes. When a skeletal, voracious, obviously ill man shows up on the island the first night of their trip, Tim’s efforts to assist him unleash a series of events which the author describes in gruesome, deliciously gory detail. Tom Padgett is the subject of a scientific test gone horribly wrong, or so it seems, and soon, the Scouts face a nightmare that worms its way into the group and wreaks every kind of havoc imaginable. With no way to leave the island (the boat Tom arrived on is disabled, and the troop was dropped off by a different boat), the boys fight to survive. Cutter’s narrative of unfolding events on the island is supplemented with well-placed interviews, pages from diaries, and magazine and newspaper articles, which provide answers to the reader in bits and pieces—but perhaps more importantly, it also delivers much-needed respites from the intense narrative as the boys battle for their lives on the island. Cutter (who created this work under a pseudonym) packs a powerful punch by plunging readers into gut-wrenching, explicit imagery that’s not for the faint of heart or the weak of stomach.