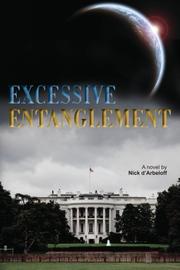 In d’Arbelloff’s debut sci-fi novel set in the early 2030s, an overpopulated Earth finds hope when Cerulea, a new, inhabitable planet, is discovered.

The book’s title refers to the separation of church and state—a relevant issue when a new off-world colony’s constitution is being written. Second-term U.S. President Virginia Belknap supports colonization to the new planet, but religious conservatives fear that “’a determined minority of Ceruleans will . . . rid this new society of what it should hold most precious: its faith in God.’” A dangerous, violent conspiracy of conservatives soon threatens to sabotage the mission, and when a conservative wins the next presidency, compromises must be made. Readers who chiefly love the awe-inspiring aspects of science fiction—the brave new worlds of never-visited planets, the shared human enterprise of venturing into outer space—may find this novel a bit disappointing, but those with a taste for behind-the-scenes horse trading, debates, cloture, contracts, points of order and dirty tricks, will thoroughly enjoy the book. Although d’Arbeloff develops his characters effectively, he often seems more interested in how things work. For example, he lovingly describes technology, in a manner reminiscent of Tom Clancy: “The V-90 Dragonfly tiltrotor aircraft streamed through the sky. . . . An offshoot of the V-22 Osprey, this was the next generation; with a top speed of 425 mph, it was 30% faster than its sibling.” When the novel renders the spacecraft environment, beauty takes a backseat to form and function: “Before them stretched a small, narrow, forested valley, rich green on either side with a long, thin, crystal blue lake in the center. Within the trees [were] the building units that would serve as the living quarters and recreational facilities for the ship’s crew.” Overall, while some readers may find this style intriguing, others may wish for a bit more wonder.

A capable sci-fi novel, more The West Wing than Kim Stanley Robinson, that focuses its thrills on the political maneuvering required for a new Earth.