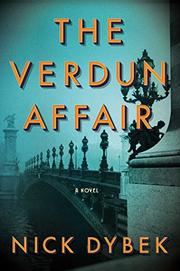 Evoking Francois Truffaut’s acclaimed movie Jules and Jim (and the semiautobiographical novel by Henry-Pierre Roché that inspired it), Dybek (When Captain Flint Was Still a Good Man, 2012) gently unfolds the story of two young men and the enigmatic woman who fascinates them and changes their lives. The story opens in Santa Monica in 1950, where Tom Combs, a Hollywood screenwriter, unexpectedly meets Paul Weyerhauser at a funeral. They have not seen each other since they first met in post–World War I Europe and became involved with a beautiful young American woman on an urgent quest. It was 1921, and Tom was assisting a priest in gathering bones for an ossuary, a memorial for soldiers lost in Verdun’s brutal conflict whose remains were strewn or buried throughout the countryside. He was charged, also, with following up pleas from the many family members who visited the priest, desperately hoping for information: “They would weep and talk—for hours sometimes—about the man they’d lost. As if all that talk might help us identify him, as if it might bring him back to life.” Among them is Sarah Hagen, whose husband, Lee, went missing in the spring of 1918. Something about her stirs Tom: He tells her he met Lee Hagen in Aix-les-Bains, that he seemed fine and happy. Sarah tries to believe the lie; certainly she believes Tom’s kindness, and the two begin an affair—brief, because Sarah goes on in her search. They meet again at a mental hospital in Italy, where an amnesiac patient may, or may not, be Lee Hagen and where they encounter Paul, an Austrian journalist also searching for a man: in his case, an American ambulance driver whose fate obsesses him. In delicate, evocative prose, Dybek captures the grim devastation of scarred battlefields, bombed villages, and fetid soil and conveys with sensitivity his characters’ unabated desire to see in the shellshocked soldier an answer to their deepest desire.

A familiar love triangle reimagined in an absorbing tale.