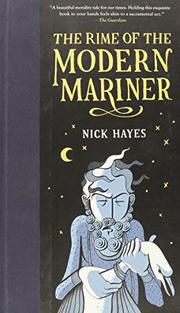 THE RIME OF THE MODERN MARINER

A visually arresting and verbally cadenced transformation of the Coleridge classic into a timely (and timeless) eco-apocalyptic fable.

Where most graphic narratives tend to be heavier with text, this book debut by an award-winning British cartoonist relies far more on the power of its dreamlike visuals, where subtleties of color and motion suggest psychedelic woodcuts. The words on each page are never more than couplets, sometimes phrases, while there are stretches of pages of indelible images with no words at all. The poetry evokes the spirit of the original, written in a tone of millennial prophecy in 1797, now imbued with greater urgency in a sea of sludge and oil spill, in phrasing that somehow intersperses 18th-century diction with references to email, Blackberry and Tupperware without jarring the reader. It begins with a man who is a bit of a detached dandy and who has just executed his divorce, tossing aside his marriage (his wife is barely mentioned) like he does a plastic foam cup. He encounters a mariner who proceeds to tell him a tale, one that involves a seafaring adventure, the fateful killing of an albatross, a descent through an ocean of pollution into hell and a rescue that allows the mariner to survive and sound his warning. After hearing the mariner’s soliloquy, the divorcé brushes it off, returning “To a world detached of consequence / Where he would not live for long.” The reader will likely find the story far more moving, as the nightmarish imagery trumps the occasional tendency toward thematic overkill.

More than a classic-comics adaptation, this is an original work of art.