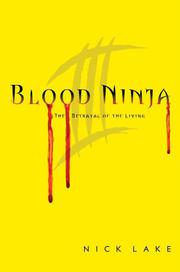 THE BETRAYAL OF THE LIVING

From the Blood Ninja series, volume 3

Meditating after destroying Lord Oda, vampire ninja Taro embarks on a quest to slay a dragon that has been troubling the city of Edo, home of the shogun.

Dragons are not the only troubles ravaging Japan; droughts and rice shortages have killed many peasants, and the dead have been returning in greater numbers and hungrier than ever before. As Taro searches for the legendary sword Kusanagi, he must also confront his father, Lord Tokugawa—and he must make sacrifices of his closest friends. Riddled with flashbacks, side narratives and more lore than ever before, Lake’s third entry in the Blood Ninja series surpasses the bloated Revenge of Lord Oda (2010) in slow pacing and needless exposition. Previously significant characters are reduced to cameo appearances in order to make space for complicated mythology lectures, recounts of past battles and those characters’ own backstories. Brief moments of tension build around Taro and Hana’s complex relationship, but there’s little drama anywhere else. Attempting to wrap up all possible plots instead results in an unwieldy soap opera with none of the ninja action and excitement the first volume promised.

For the trilogy's fans only.