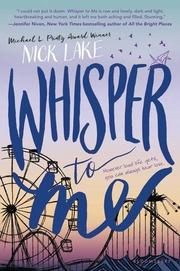 After Cassie finds a human foot washed up on a New Jersey beach, she starts to hear a voice that threatens to harm her and others unless she obeys it.

Cassie lives with her father, an ex–Navy SEAL with anger issues stemming from PTSD. Briefly hospitalized due to the voice, Cassie finds a friend, Paris, arguably worse off than she is, who encourages her to stop taking her meds. Cassie’s tale takes the form of a letter pleading for understanding to a boy she fell in love with and misses terribly. The lengthy novel gives Printz winner Lake ample space to play with form and style as Cassie’s letter unravels the details of her summer, which range from Ferris wheels and roller derby to deeply internalized trauma and fear. In a distinctive, conversational voice, she finally tells the boy, in fits and starts and a lot of lists, the story of her struggles with mental illness and guilt over her mother’s death. The “you” in Cassie’s tragic summer tale remains nameless throughout the novel. Because it’s a letter addressed to him, the result is a second-person narrative of nearly equal weight to Cassie’s first-person story, emphasizing the novel’s themes of duality and internal struggle against one’s own demons.