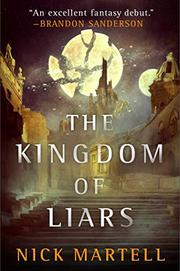 THE KINGDOM OF LIARS

From the Legacy of the Mercenary King series, volume 1

Martell’s debut novel is a shelf-bending adventure fantasy that chronicles the life—and looming death—of Michael Kingman, an ill-fated young man awaiting execution for the killing of a king.

Set in a secondary world—particularly noteworthy for a fractured moon whose pieces frequently fall to the planet, wreaking havoc on the populace—the narrative takes place largely in Hollow, a once-thriving kingdom now beleaguered by tragedy, treason, and an impending civil war. Michael is an outcast whose father was executed for infamously killing a child prince years earlier, and he's obsessed with finding the truth behind his beloved father’s death. A war hero, the king’s adviser, and a man of honor, his father would never have killed a child, especially a child he vowed to protect. But with the once-venerated name of Kingman now irrevocably tarnished, Michael, a con man doing what he needs to survive, is faced with the monumental task of restoring his family’s name. After an alcoholic nobleman nicknamed Domet the Deranged agrees to help Michael prove his father was framed in addition to teaching the young Kingman how to use his fledgling magical Fabrication skills, Michael slowly realizes that his father was just a pawn in a much larger game of politics and power. An obvious strength of this novel is Martell’s worldbuilding prowess as well as his utilization of magic, which is subtle but powerful. But while the multiple subplots surrounding Kingman’s father’s death create a knotty mystery, they do sometimes slow the book's momentum. Martell generally keeps the pages turning, however, with a story full of relentless action and more than a few jaw-dropping plot twists. The structure of the narrative—a character awaiting death sharing their life story—is a bit overused in fantasy (in The Ruin of Kings by Jenn Lyons, among others), but the quality of the story more than makes up for it.

An impressive fantasy debut that creates a solid foundation for (hopefully) a much larger narrative to come.