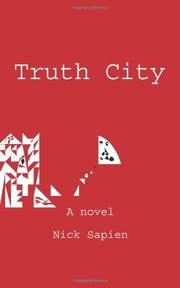 A heroic geneticist stands against a tyrannical corporation in Sapien’s (Drosophila, 2007) cyberpunk novel.

In the future, a machine that distinguishes between truths and lies stands as the primary mechanism for social control. Most children arrive as a genetic cocktail of their parents’ choices, a process known as biosplicing. When Peter, a talented genetic engineer, lashes out against his biospliced boss, the truth machine reveals that he has committed a “hate crime.” To atone, Peter must undergo electro-surgery on his brain and prove to the truth machine that he no longer disdains the biospliced—or he’ll face exile to the Outcast Zone. But, after accidentally assaulting his beautiful neighbor Madeleine, Peter discovers a curious fact: He has mysteriously developed the ability to deceive the truth machine. This realization sends Peter down a rabbit hole of intrigue and deception, as he investigates the secret revolution against the Consortium, an all-powerful corporation that has assumed control of the government. Peter is also a book collector (books are little more than curiosities of a long-forgotten age), and his incomplete text of a revolutionary tract called The Red Book spurs him on his quest to find a use for his newfound power. After he somehow convinces Madeleine to fall in love with him after the assault, he searches for freedom for his family and an escape from the Consortium’s power. Sapien is at his best when building a unique but familiar world, a mix of Minority Report, The Matrix and Brave New World. Many standby cyberpunk elements fill out the novel—for instance, a neurological analogue to the Internet is the primary method of entertainment and sometimes work—but Sapien’s innovative truth machine provides a philosophical and ethical twist. However, the characters are mostly one-dimensional, especially Madeleine with her easy switch from anger and fear to love. It’s clear that Sapien enjoys battling the big ideas, which critical passages from The Red Book help illuminate, but the story itself, both in its pacing and the completeness of its characters, could benefit from more attention.

A smart, solid skeleton of a story that lacks muscle.