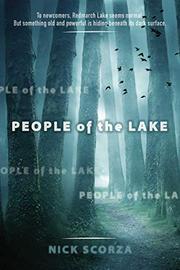 PEOPLE OF THE LAKE

A new girl threatens small-town life when she finds that recent deaths possibly connect to the supernatural underworld.

With her mother’s new boyfriend moving in, rising high school junior Clara Morris decides to spend the summer with her father at Redmarch Lake. When Neil, a local teen, dies, Clara enlists Ash, Neil’s ex-girlfriend, and semi-local boy, Hector, to investigate. Beneath the surface of town superstition and unexplained occurrences they uncover otherworldly, shadowy forces at play. Though plot and protagonist provide for an engaging story linked to a mirrored, paranormal realm, attempts at including diversity become problematic. The purely physical descriptions of Clara and her deceased twin, Zoe, ultimately emphasize the white default by assuming rather than naming race. Additionally, Indigenous peoples and their cultures feel treated as set pieces. A single Indigenous character, Deputy Chief Elaine Cross River, is described generically as a “tough-looking Native American woman,” with no mention of her nation. References to specific Native nations and their histories seem like devices to root this work of fiction in reality rather than adding meaningful context. At the same time, significant objects and drawings, though implied to be Native, are framed as being unlike “any other earthly culture,” feeding into mystical Indian tropes, and the implications that this haunted place results from or relates to some Native influence reflect many stereotypes.

A good ghost story that drowns in the lake of superficial inclusion.