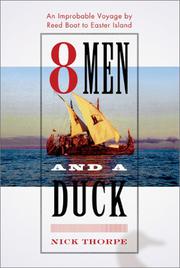 EIGHT MEN AND A DUCK

An Improbable Voyage by Reed Boat to Easter Island

Thorpe’s firsthand account of his experience as a crewmember on the Viracocha, a boat made of reeds that sailed the 2,000 miles from Chile to Easter Island.

At the dawn of the new millennium, professional adventurer and Thor Heyerdahl fan Phil Buck was on the shores of Lake Titicaca overseeing the finishing touches to a reed boat christened the Viracocha (another name for Kon-Tiki). No flimsy raft, the Viracocha was 60 feet long, had two masts, and was a masterwork of pre-Incan–style workmanship created by a local family who specialized in the traditional craft; Buck planned to sail her to Easter Island in a further exploration of Heyerdahl’s theories. Thorpe, a wandering Scottish journalist with a very understanding wife, stumbled across the project and, immediately enchanted, lucked into a space onboard. The account that follows, told in his addictive, self-deprecating, tongue-in-cheek style, is nearly unbelievable, from the trials of actually getting the boat launched to the final moments of the Viracocha at Easter Island. Once underway, the craft practically sailed herself for much of the journey. A good thing, as the electronics and generating system failed, one right after the other, and the sails were a pure experiment (they had been created by Thorpe himself in the absence of anyone with greater knowledge of sail craft—he had none, either, but had nothing else to do before the expedition launched). Despite the capricious nature of the voyage, the almost staggering lack of experience of the crew, and the constant presence of sharks, most of the drama comes from the interaction of the eight men and their duck mascot, together 24 hours a day for a month and a half.

Thorpe’s maiden voyage as an author is wholly absorbing and completely irresistible.