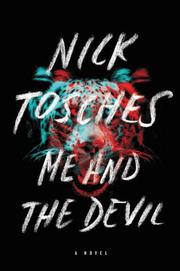 ME AND THE DEVIL

The longtime chronicler of pop music's shadowy corners explores New York's dark side in this rambling, at times grotesque tale.

The narrator of Tosches' fourth novel (In the Hand of Dante, 2002, etc.), like the author himself, is an aging author named Nick with an abiding love for art and music. (Rock icons Keith Richards and Peter Wolf have brief cameos.) But likening the novel's Nick too much to the author Tosches would be pushing it, or at least the reader would hope: Our hero is a sexual reprobate prone to racist utterances who’s consumed with an unseemly fetish for women's blood, and in his obsessive fog he may have wound up committing murder. The two main relationships in his life are at least consensual: He picks up one woman in a bar during an attempt to quit drinking, while another woman is a young S&M enthusiast who haunts the same AA meetings he does. The transgressive sex scenes owe a good deal to Dennis Cooper, who's long reveled in this material, but while Tosches intentionally pushes the boundaries of good taste—provocateurs like Hubert Selby Jr. and Charles Bukowski are other obvious touchstones—it's the looseness of the narrative that's more exhausting. Nick is prone to longueurs on getting sober (he spends a good deal of time locating a drug that allegedly cures alcoholism), sex, Greek and Latin etymology, Manhattan gentrification and the fate of the publishing industry. The plot between the riffs is sketchy at best, though Tosches' streetwise-professor tone keeps the book from derailing entirely, and Nick's confrontation with the devil of the title is an entertainingly blackhearted look at one man's narcissism.

Grim, oversexed, arrogant, intense—Tosches’ protagonist has dumped out his id for all to see, narrative integrity be damned.