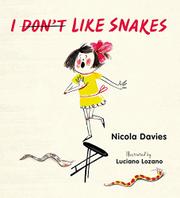 A girl’s family shows her oodles of cool details about snakes.

While other families keep dogs, cats, or birds as pets, this first-person narrator is seriously displeased that her own keeps snakes. Why does she mind? Some of her reasons are based on myths (she thinks they’re slimy), while others are correct (they do slither). But for every complaint, her father, mother, and brother explain such fascinating snake traits that she’s hooked. From funny (“The snake wriggles out of its skin the way you pull your foot out of a sock, leaving the old skin inside out!”) to shiver-inducing (“They have fangs that are hollow, like a doctor’s needle, which inject venom. They strike like lightning”), the facts are captivating. Mixed-media drawings feature energetically scruffy lines and vibrant colors, and multiple scenes appear per page, showing the family at home and snakes in the wild. One close-up drawing of multicolored snake heads, emphasizing their varying lidless eyes, is downright beautiful. It’s somewhat implausible that this family has evidently kept snakes all along yet the girl still thought they were slimy, but that hiccup pales before Lozano’s dynamic visual blend of storybook arc and nonfiction.

The protagonist isn’t the only one who will find snakes spellbinding by the end.