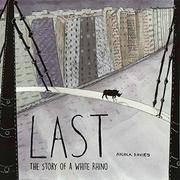 The Story of a White Rhino

Is the male white rhinoceros at the zoo the only one of his kind left?

The text is sparse and thoughtful. The artwork combines sophisticated collage—including words from many languages inscribed on buildings and animals—with a distinctive drawing style that breathes life equally into humans and animals, automobiles and elevated trains, gritty urban settings and vividly flowered meadows. The first double-page spread has a beige-and-gray palette that sets a somber mood. A young person of color—who reappears later—is gazing toward the protagonist’s large, foregrounded head. A gray city lies behind this figure. The only words: “I am the last.” The next spread continues the bleakness with an aerial view of the zoo and its surrounds. The text continues with the rhino’s sad musing. The pages that follow are a bright and joyous contrast, as readers see the rhinoceros recalling his native land. No one could fail to be moved by baby rhinos cavorting in flamingo-filled waters or by the protagonist gazing adoringly at his mama, who smells “beautiful.” The mother’s death from a horn poacher’s bullet is subtly portrayed but obvious enough to elicit questions from young readers. More “lasts” at the zoo create further pathos. The rhino’s eventual, final relocation will dispel some of the tale’s grimness for little ones; older readers will feel less optimistic when they read the endnotes about a real rhino named Sudan. (This book was reviewed digitally with 9.25-by-18.5-inch double-page spreads viewed at 74% of actual size.)