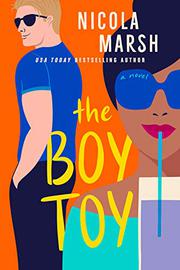 A 37-year-old Indian Australian woman's assumptions about love and relationships are shaken by a White stuntman 10 years her junior.

Physical therapist Samira Broderick moved from Melbourne to Los Angeles in the aftermath of a painful divorce, needing to get away from her Indian mother’s relentless matchmaking. Almost a decade later, she has returned, leaving her bustling LA practice to work for her cousin’s new health and fitness enterprise. Samira resents her mother's involvement in her failed arranged marriage and dislikes her mother's interference in her currently floundering love life, but she still hopes her return can help heal old wounds. With a plate so full, Samira is not looking for anything permanent when she has a one-night stand with Rory Radcliffe. Rory moves on from partners quickly because he feels the need to hide his stutter—a need that's also forced the talented stuntman to avoid roles requiring him to talk. But when he gets an opportunity to audition as the host of Renegades, a reality show touted as Australia’s “next big thing,” Rory decides to find a dialect coach and make an attempt. Though they had a wonderful night together, Rory decides to forget about Samira and focus on the audition—but his plans are derailed when he discovers that she's his coach. Marsh turns an insightful and sensitive lens on the role of the body in matters of self-image and love. But Samira and Rory are so wrapped up in the caprices of their own hearts, minds, and bodies that there's little room for them to truly discover each other. Marsh tries to sketch a portrait of Indian culture by including references to various food preparations, but she misses the opportunity to comment on the complexities of community ties in the Indian diaspora, where judgmental attitudes can co-exist with support and empathy.

A faltering story rescued by an engaging premise.