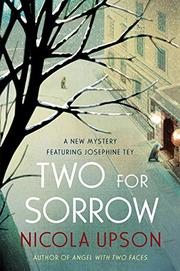 Deep into her research regarding the lives of two executed baby killers, mystery writer Josephine Tey succumbs to a romantic crisis.

Staying at the women-only Cowdray Club in London, Josephine postpones contacting her sometime beau, Archie Penrose of the Yard, as she wonders who’s left a gardenia for her at reception. By the time she finds out, Penrose has arrived at the club to deal with the horrific murder of former Holloway Prison inmate Marjorie Baker, who’d been working as a seamstress at the design atelier of Penrose’s cousins Lettice and Ronnie. The girls had been stitching up costumes for the upcoming Cowdray fundraiser starring Noël Coward and Gertrude Lawrence, a gala now in jeopardy. When an accident nearly claims the life of Lucy, a Cowdray servant and friend of Marjorie, Penrose zeroes in on secrets she and Marjorie may have shared involving Cowdray personnel—especially Celia Bannerman, a former warder at Holloway during the execution of Amelia Sach and Annie Walters, notorious baby killers, and Eleanor Vale, another incarcerated evildoer. Meanwhile, Josephine learns who her secret admirer is and wrestles with Sapphic yearnings. The night of the gala finds Noel and Gertie performing while Penrose sets a trap for Marjorie’s killer, who has a major surprise in reserve.

Less a reconsideration of the plight of Victorian women and children via the story of Sach and Walters than a study of same-sex love and obsession focusing on Tey’s relationships (Angel with Two Faces, 2010, etc.).