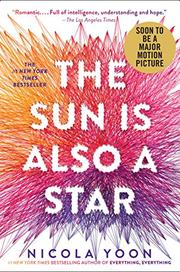 THE SUN IS ALSO A STAR

Natasha and Daniel meet, get existential, and fall in love during 12 intense hours in New York City.

Natasha believes in science and facts, things she can quantify. Fact: undocumented immigrants in the U.S., her family is being deported to Jamaica in a matter of hours. Daniel’s a poet who believes in love, something that can’t be explained. Fact: his parents, Korean immigrants, expect him to attend an Ivy League school and become an M.D. When Natasha and Daniel meet, Natasha’s understandably distracted—and doesn’t want to be distracted by Daniel. Daniel feels what in Japanese is called koi no yokan, “the feeling when you meet someone that you’re going to fall in love with them.” The narrative alternates between the pair, their first-person accounts punctuated by musings that include compelling character histories. Daniel—sure they’re meant to be—is determined to get Natasha to fall in love with him (using a scientific list). Meanwhile, Natasha desperately attempts to forestall her family’s deportation and, despite herself, begins to fall for sweet, disarmingly earnest Daniel. This could be a sappy, saccharine story of love conquering all, but Yoon’s lush prose chronicles an authentic romance that’s also a meditation on family, immigration, and fate.

With appeal to cynics and romantics alike, this profound exploration of life and love tempers harsh realities with the beauty of hope in a way that is both deeply moving and satisfying.