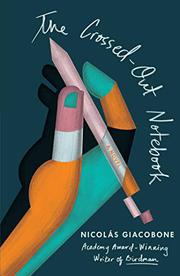 A screenwriter is held captive by a director demanding a brilliant script in this film-world satire.

Auteur theory, schmauteur theory is the prevailing sentiment of the debut novel by Argentine writer Giacobone, who co-wrote the 2014 Oscar-winning film Birdman. Pablo, the narrator, has written two uncredited scripts for acclaimed director Santiago in his ill-lit basement; Pablo is “not imprisoned; basemented,” he says, but Santiago won't let him loose and enjoys making threats with a gun to keep him working. The stakes are higher for the third script, which Santiago insists must be a world-beating classic; Jack Nicholson, Meryl Streep, and Sean Penn are attached. But Pablo’s writer's block is acute, and he's increasingly resentful of Santiago, who won't give him a writing credit and delivers lame critiques of the script in progress. (“The greatest Latin American director of all time is addicted to platitudes and cheese,” Pablo confides in his notebook. “Maybe that’s why he’s the greatest.”) It’s a good setup for a moody thriller: Will Pablo deliver a masterpiece? Can he escape Santiago’s clutches? Of course, that one’s already been made (Stephen King’s Misery), so Giacobone’s story takes a more meandering, philosophical approach. The novel comprises the notebooks and encrypted Word files Pablo fills when he’s not working on the script, stuffed with meditations on music (especially the Beatles), literature (especially Borges and Beckett), and great scripts (Peter Shaffer’s Amadeus in particular). Via Pablo, Giacobone eagerly explores the nature of inspiration and film’s essence as a collaborative art. But he also keeps the prose breezy; much of the novel is delivered in snappy, witty one-sentence paragraphs. And he assuredly ratchets up the tension as Pablo’s deadline approaches, making the final act a twisty revenge fantasy against formulaic art-making of all sorts.

A clever meditation on the joys and agonies of creativity, enlivened by its pressure-cooker plot.