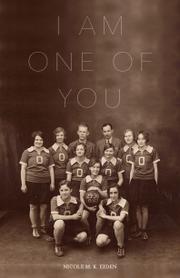 I Am One of You

In a new debut collection, Eiden writes of poems that “move me every time,” among other subjects.

In James Baldwin’s 1956 novel Giovanni’s Room, a character muses that “perhaps home is not a place but simply an irrevocable condition.” If Eiden’s poetry is about any one thing, it is that irrevocable condition. It’s about the old home we leave without ever quite leaving it and the new home we build out of some uneven mixture of coincidence and desire. It’s also about marriage—the unlikely effort to forge a home with another human—and about children and our hopeful wish to strengthen a home for those who come after us. The poet is originally from Ohio, and although she moved away from there more than a decade ago, it’s clear that the state remains a gravitational center with real pull for her. In “To Know the Smell of Ohio,” for example, she writes that “You don’t have to / walk in the country / just step where / the river meets mud / Unlocked leafy smell.” She remembers this smell while in her new home in New Orleans, where she’s settled with her husband and new child. That city appears to be the other pole of the ellipse of her life and the other main setting of her poetry, as in the opening lines of “Moving back to New Orleans”: “I sit on a cardboard box in another new place, my in-laws’ unspoiled / white house four days before the anniversary of Katrina / there is little blood flow in my body, I haven’t said much.” Eiden writes frank, beautiful verse about her relationship with her husband: “two people who love each other / maybe unevenly, maybe not enough / can we ever articulate where we / fit together how far we will go in / I can only go on answering yes.” And then there’s the newest resident of Eiden’s home, which she sings of softly in “To My Child, For My Parents”: “I look around my tender room and / think of all the things / I want you, my child, to know / of me, of life / poetry art kindness.” On this tour of all her homes, the poet writes with pride but without arrogance, with wit but without guile, and with grace but without unnecessary ornament.

Moving poetry that kindly welcomes readers in to sit down and rest awhile.