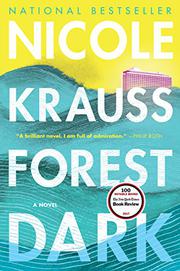 As the story opens, Jules Epstein, a wealthy retired divorcé, has gone missing in Israel, leaving behind a host of questions: why did he trade in his Fifth Avenue apartment for a decrepit seaside hovel? Why did he choose to spend a chunk of his fortune to help fund a biopic about King David? And what prompted the “slow unfurling of self-knowledge” that led him to abandon his well-off life? Meanwhile, in an alternate set of chapters, an unnamed young novelist has come to the Tel Aviv Hilton hoping to kick-start her next book and escape her crumbling marriage. There, she’s contacted by a man soliciting her help on a film based on an unpublished Kafka play and who also has some hard-to-believe news to deliver about Kafka himself. Jules and the novelist never directly connect, but they share similar existential predicaments: both are struggling to reconcile American and Israeli cultures and wrestle with religious and philosophical questions. Jules falls under the spell of a rabbi who opines on the connection between global and personal transformation, while the novelist revisits Kafka and Freud’s concept of unheimlich, a sort of world-weary anxiety and dread. Krauss, as ever, writes beautifully about complex themes, and she has a keen eye for the way Israel’s culture, slower but more alert to violence, requires its American characters to reboot their perceptions. Her big questions don’t always provoke big effects, though, and much of the drama she establishes for her two characters feels dry, with her riffs on Kafka and Judaism more essayistic than novelistic. And though the novel never promised high drama, its low boil makes it harder to inspire the reader to draw connections within her braided narrative.

An ambitiously high-concept tale that mainly idles in a contemplative register.