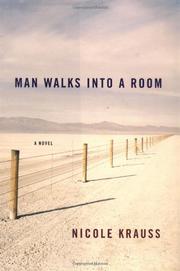 MAN WALKS INTO A ROOM

There are some lovely moments (and echoes of early Saul Bellow) in this interestingly conceived first novel, but its somewhat attenuated account of an amnesiac’s quest for his missing years trails off into improbability and inconclusiveness.

The story begins in a desert near Las Vegas where Columbia University English professor (and California native) Samson Greene is found wandering, bereft of memory or purpose. He’s returned home to his frantic wife Anna, and undergoes successful surgery for the removal of a benign brain tumor—but thereafter cannot remember his life beyond the age of 12. For example, he no longer knows Anna, and they gradually drift apart. While in therapy he learns of an experimental medical procedure promising to assist memory, and travels west again, to become a volunteer patient. Hesitant relationships—with the research scientist who proposes to “implant” in his brain the memories of another man, as well as with his chosen “Input” (i.e., memory “donor”), an amusingly Babbitt-like businessman, among others more briefly encountered—are prelude to a deeply ironic “awakening” as the burden of what Samson now “remembers” propels him on yet another quest: for the grave of his mother, whose recent death lies hidden among the scattered fragments of his recent years. Krauss tells her strange story—a knotty combination of psychological novel and cautionary science-fiction tale—with considerable finesse, crafting graceful compound-complex sentences charged with understated emotion and given subtle twists of meaning by frequent qualifications and reversals. Samson’s captivity and confusion are quite movingly rendered, especially during the lengthy dénouement, which introduces the affecting figure of “Sammy’s” senile great-uncle Max, himself a “prisoner” (in a nursing home), likewise robbed of his memory. Alas, following this vivid sequence, Krauss seems uncertain how to end her story.

A bit too theme-driven and intermittently static, but Krauss is a highly intelligent writer. It’ll be interesting to see what she turns to next.