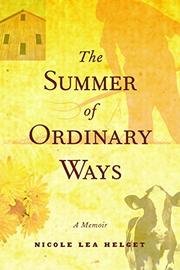 THE SUMMER OF ORDINARY WAYS

Memoir of a farm childhood too often buffeted by parental rage and melancholy.

Born in 1976, first-time author Helget grew up in Sleepy Eye, Minn., a deeply parochial place where her family tended 80 acres. Her father was a reluctant farmer—he played Triple-A ball for five years before the Red Sox let him go in 1977—and her mother was a reluctant parent, despite bearing six daughters. They rode an emotional roller coaster: Dad would lose himself in fierce moods, at one point pitch-forking a cow to death when it would not leave her calf, another time striking his wife with a blazing hot pan; Mom would retreat into silent glooms and lock herself away, emerging only for Sunday church services. Yet Helget also depicts her father as “a man who can be so lovely sometimes that you and your sisters collect under the wonder of him” and writes with sympathy of the genes that held her mother captive. She carries those genes herself, the author finds. “We have a way of making a man love us and suffer him for doing it,” she notes of herself and her sisters. “While we love our babies, we detest ourselves and wrestle against anything and everything to deny and prove it.” Mercifully, Helget also tells stories of a different tone that let the reader catch a breath: One concerns Wreck and Bump, two lowly but ambitious mutts bent on fornication and chicken meat, drinking moonshine and motor oil. Most of the chapters, it must be admitted, are overcast with bleakness—what a wonder it is, then, that Helget’s storytelling feels so fresh and vital

Beautifully crafted, each chapter a balanced and snug set piece with sentences as carefully constructed as a stone wall.