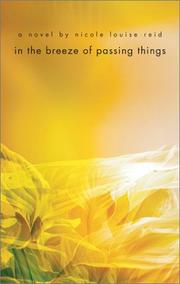 IN THE BREEZE OF PASSING THINGS

A lyrical, deeply felt debut about a young girl’s search for her father.

Folks who are down on their luck often move around a lot: divorceés, debtors, ne’er-do-wells, and malcontents of every stripe rarely stay in one place for long. It’s one of the hardest things about being poor, and it’s especially hard on kids, who are usually even more set on their routines than their elders. Sudden uprootings have become routine for ten-year-old narrator Iva Giles and her younger sister Mally, but neither has really got used to them. For several years now, ever since Iva’s tense and harried mother Lily moved the girls from their childhood home (“our true house,” as Iva would have it) in Nacogdoches, Louisiana, they’ve been relocating to smaller and smaller places throughout the South, mainly in an attempt to get as far away as possible from Lily’s estranged husband, Jameson. Affectionate but unstable, Jameson was obsessed with water, constantly disappearing without warning and turning up in some town or other along a coast or riverbank. He was less than useless as a husband and father, but Iva adored him and dreams of a family reunion. Lily wants no part of Jameson, especially now that he’s stopped sending them money. But Iva is determined, and one night she runs away and takes a bus to Pascagoula, Mississippi, where her father was last heard from. Any young girl traveling alone in the dead of night is going to end up knowing more of the world than she ought, but Iva learns as much about herself as about her father, which makes the trip (despite its disappointments) a success in the end.

Intensely interior and just a bit too sincere for comfort: Reid would have done better to take us out of Iva’s head for a bit of fresh air.