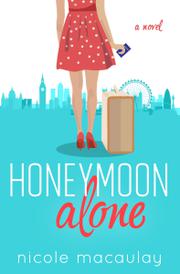 A woman fakes her way through a London vacation in Macaulay’s comedic debut novel.

Third grade teacher Lucy Gray does not have much time for a love life, but everyone in her family has been getting married recently, and she can’t stand to attend her sister’s wedding alone. She begs a co-worker to come and pretend to be her boyfriend, but he ends up making out with her cousin in the photo booth—a fact that everyone discovers just as Lucy is giving her maid of honor speech. Afterward, the wedding psychic (it’s an ’80s-themed wedding) tells Lucy she needs to start listening to signs from the universe. It turns out that her sister, the indecisive Marian, booked two Christmastime honeymoons, and after she and her husband leave on their cruise to the islands of Greece, Lucy realizes there’s an unused hotel suite sitting in London. “I just happened to hear a message from someone in London because Marian happened to forget to cancel her reservation – something she’d never do in a million years,” thinks Lucy. “If this isn’t some kind of sign, then….” The only problem is that, while staying at the honeymooners-only Chaizer London, she’ll have to pretend to be Marian…and keep making excuses for why her new husband isn’t with it her. While reconnecting with an old classmate who happens to be in town, Lucy finally begins to feel a bit of freedom. Cary Stewart is an actor—a handsome one at that—and he proves amenable to stepping into the role of temporary husband. However, as her ruse attracts the attention of overzealous hotel employee Oliver Burke and her family back in Massachusetts begins to interfere, Lucy’s honeymoon-for-one transforms from a relaxing getaway into an increasingly complicated deception. Macaulay’s prose is smooth and funny, capturing Lucy’s family-related neuroses: “The next day, as I step outside The Chaizer into the morning sunshine, I am sad to report that it still hasn’t rained. Not once. In London. London, a place known for its rain. And Prince William. It’s almost as if my mother called Mother Nature and told her, mother-to-mother, to hold off until I left, just to spite me for embarking on this fool’s mission.” The plot is fairly absurd: Why would any hotel care whether or not its guests were really on their honeymoon? But Macaulay unfurls it in such a pleasant, slightly goofy way that its many contrivances seem forgivable. Lucy is an enjoyable protagonist, and her enthusiasm for the places she visits rubs off on the reader. The supporting characters are likable as well, and Macaulay’s portrayal of Lucy’s cartoonishly overbearing family—mostly in the form of blog posts—is truly anxiety inducing. Readers looking for a lighthearted love story with plenty of London coziness and Christmas cheer can do far worse than Macaulay’s charming vacation story.

A breezy, charming novel that finds humor in the societal pressures to find a husband.