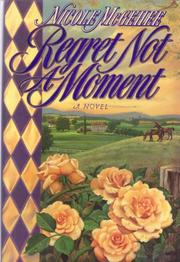 REGRET NOT A MOMENT

Passionate romance, spanning three continents and three decades but remaining unquenched, by first-time novelist McGehee. In 1930, beautiful horsewoman Devon Richmond, wealthy daughter of Virginia's landed gentry, is 25, unmarried, and boldly outspoken; her parents fear she'll be an old maid—until handsome, dashing John Alexander arrives on a visit from New York; the two fall passionately in love and marry. But fissures develop between them almost immediately: His business is in New York, her horses are in Virginia; he has a history of philandering, she thinks he may still philander; she wants and child, and he fears fatherhood. When a daughter is born, they drift apart; when the daughter dies in a riding accident, they divorce. Flash forward to 1942, when Devon, remarried to a British lord stationed for the war in Cairo, learns that John is wounded; she flies to Geneva and finds her photograph on the table next to the bed where his leg has been amputated. But he'll survive. Now it's 1957, and Devon is raising a daughter by her second marriage, Francesca, in New York society and in Virginia, where Devon runs a thriving business breeding Thoroughbreds. Reenter John Alexander, whom Francesca meets without knowing who he is in Tiffany's and brings home to Devon. They become friends—though secretly still yearn feverishly for each other. When Francesca begs her mother to be allowed to train as a jockey, John advocates her cause; and when Devon joins her black trainer in defying the Ku Klux Klan in a midnight raid on the farm, John is bowled over with admiration. They remarry in early old age; they ``regret not a moment'' of their lives. Readers won't regret a few hours spent with this amiable romance—especially if they spend them at the beach.