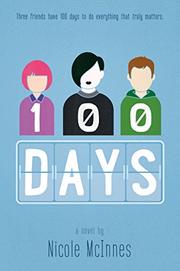 Three misfits whose friendship fell apart in the sixth grade rediscover their bond in high school.

Their story unfolds in alternating first-person narration. As a toddler, Agnes was diagnosed with progeria syndrome, which causes her to age prematurely and remain physically small. Her fat best friend, Moira, endured taunts due to her size until she discovered that dressing as a goth and acting tough provided some protection from her classmates' cruelty. When Boone, with whom they used to be close, is particularly nasty to them one day, it paradoxically sets off a chain of events that lead them back to friendship. Each character is fully explored, and the confessional, introspective voices of the three white teens nicely, if at times a bit obviously, explain their motivations. Boone's struggle to make ends meet financially and his desperation to keep his mother's plunge into depression a secret after the death of his dad are keenly portrayed, and the juxtaposition of his home life against the extraordinarily caring families of Moira and Agnes is startling, even as Agnes faces a medical condition that affects every aspect of her life and Moira deals with body-image agony.

A tender, often funny tale, this story's heartbreaking ending packs no less of a punch even though readers are prepared for it