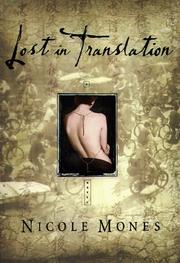 A search in China’s desert interior for the remains of the Peking Man becomes a compassionate tale of new loves found and old hurts forgiven as an expat American woman serves as the group’s interpreter. Newcomer Mones asks that nuances and complexities of character carry the narrative, rather than a sequence of sensational acts. All of the people here, minor or major, are subtly shaded: their behavior results from their temperament more than from the diversionary dictates of plot. Thirtyish Alice has been working as an interpreter in Beijing since college, but she hasn’t yet found the man—preferably Chinese, so as to let her forget her American self—to fully understand or appreciate her. She only reluctantly accompanies recently divorced American Adam Spencer and two Chinese specialists, Dr. Lin and Dr. Kong, on a search for the remains of Peking Man, rumored to have been hidden by none other than the noted theologian and archeologist Pierre Teilhard de Chardin. Quotes from Teilhard give a wider if sometimes intrusive take on the quest as the quartet conducts a search as riveting as any mystery. But three of the party also have personal issues to confront: Alice’s father is a racist congressman whose speech about the young Alice led to a tragedy; Adam feels he’s a failure and misses his only son; Lin still loves his wife, who disappeared during the Cultural Revolution. In vividly rendered Chinese settings, Alice, while falling for Lin, learns that her father, whom she loves in spite of his lamentable attitudes, is dying. Meanwhile, Lin—though on the lookout for his erstwhile wife, once a prisoner in the region—gradually finds himself smitten by the American. At story’s end, sundry disappointments will be eased by unanticipated discoveries . An absorbing, richly imagined, and intelligent debut. (Book-of-the-Month Club/Quality Paperback Book Club Selection; author tour)