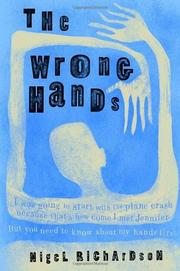 Graham Sinclair has very odd hands. Exactly how they’re different is vague, but the repercussions of having these “wrong” hands are not. He’s called “Spakky” and “Perv” and his own dad ignores him while his mother develops her own issues around his rejection from the community. They send Graham to London to live with his uncle, whose supervision is somewhat spotty. When a plane crashes in the neighborhood, Graham’s hands are the source of a miraculous, but secret rescue of a baby. Complications ensue when an observer, Jennifer Smith, appoints herself his handler and publicist. That she is a classy embodiment of all his fantasies about women blinds Graham to her manipulations. Feeling like a freak, self-absorbed and inhabiting his own version of the world leaves Jennifer’s power over him unchecked until accusations of murder heighten the stakes. It’s flight or face the music, and Graham’s choices are as inevitable as they are surprising. A riveting psychological exploration of mutant powers grounded in the sad realities of everyday life. (Fiction. YA)