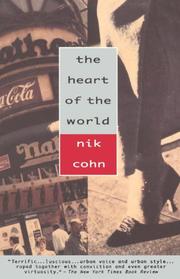 THE HEART OF THE WORLD

Moody, sweet-spirited survey of lowlifes, castoffs, and misfits along Broadway, from Battery Park to Times Square. Cohn (King Death, 1975; Rock from the Beginning, 1969) embraces everybody, standing up for thieves, transvestites, and grotesques with hearts of gold. In Battery Park, his Virgil is 20-year-old, drum-playing Sasha Zim from Moscow, a cabdriver in ""bomber jacket and Hawaiian shirt, jogging pants, lumberjack boots, a buffalo-head Western belt and a small silver crucifix,"" who learned English from daytime soap operas and says things such as, ""In taxi is university of all mankinds, what you don't know won't hurt you, what you do is killing you dead. Whole world is going Helen Handbasket."" Sasha introduces Cohn to a Hispanic team of ""Liberty Boosters,"" pickpockets of the Liberty Bay ferry, one of whom is Stoney, who has ""the rapture"" (epileptic attacks during which God speaks to him) and to whom wallets leap if he merely ""consents to receive"" them. Moving into an eight-by-ten-foot room in Times Square's walk-up Moose Hotel, Cohn meets his young, dope-taking alcoholic transvestite neighbor, Lush Life, a vision in Passion Pink nail polish who left home at 15 and forever abandoned her real name of Geraldo Cruz. Cohn gives us much background on P.T. Barnum and his famed museum of freaks, on Hubert's Museum and Flea Circus in Times Square, on the Gilded Age and Evelyn Nesbit and Stanford White, on the sins of Robert Moses (whose rebuilding plans for the city, Cohn says, cast whole populations into the street), on the sex shops and the Metropole jazz bar (now gone topless) and McSorley's men-only saloon (now letting in women), and on Times Square's Chess and Checkers Club. He ends on chords that can only be called ashen. Striving like Whitman, not cynical, but at last quite desolate.