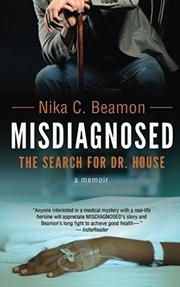 The Search for Dr. House

Beamon’s first memoir (I Didn't Work This Hard Just to Get Married, 2009) tells of how multiple specialists struggled to diagnose her many ailments.
The author began her battle with chronic illness in her mid-20s, just as she started a new high-pressure job as a television journalist in New York City. Early on, her symptoms descended upon her with vigor, including abdominal and joint pain, debilitating fatigue and fevers. She collapsed at work, at home and even on her first overnight stay with a man who became her longtime boyfriend. Soon, her life revolved around exam rooms, lab tests and medical forms. Beamon hid her condition at work despite growing weaker as years passed. Eventually, after both her parents had health scares of their own, Beamon became despondent about ever feeling well again. Her desperation, frustration and, later, anger at being subjected to multiple hospital visits, invasive exams, and increasingly befuddled experts led her to search for a Sherlock of rare illnesses—her own “Dr. House,” as in the former Fox television drama House, M.D. Using Google, Beamon found her doctor-savior in an autoimmune disorder specialist named Dr. Reed; once the physician gave her condition a name (or, rather, a collection of initials followed by a numeral: IgG4-related systemic disease), Beamon found peace of mind at last. Much of the book follows her numbing routine of doctors’ appointments, which becomes less distressing and more mundane as the book goes on. At first, her confusion and anger at each inconclusive test result seem overwrought, but later, her voice turns jaded, reflecting the toll that the anxiety had taken on her mind and body. Beamon includes moments when her precarious health is in check, including intimate rendezvous with men in her life. At times, she alternates naughty sex acts with graphic medical incidents, and this variety is engaging—even shocking. However, it also makes the book’s plot seem uneven. Overall, the author’s vacillating health status drives much of the action, and at times, her pessimistic inner monologue can feel draining, yet she rarely succumbs to self-pity.
A saga of dealing with a chronic illness that shows how health intertwines with work, love and life.