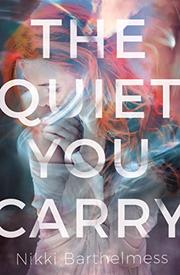 THE QUIET YOU CARRY

From the Quiet You Carry series, volume 1

To her confusion, 17-year-old Victoria is ripped from her father and stepmother’s home in Reno by Child Protective Services in the middle of the night.

Placed in foster care, she must focus on completing high school and applying for college while wrestling with whether to share the truth of what happened that night with anyone. It’s clear from early on that Victoria’s father accused her of making sexual advances on him, but what is not clear and helps create suspense is why her father now wants her out of his life and whether Victoria will come to terms with the psychological damage from her abuse that initially leads her into denial. At first Victoria tries to keep her foster care status a secret at school, but circumstances make this increasingly difficult. She then starts to consider the danger her 14-year-old stepsister might still be in. Debut novelist Barthelmess has written multifaceted characters that are believable, particularly Victoria, her strict foster mother, and her troubled foster sister, Jamie. Slightly less believable, because they are unfailingly kind, understanding, and wise, are Victoria’s new friend Latinx Christina (the sole character of color) and her love interest, a boy named Kale. Victoria’s first-person voice is strong and appealing, and her story is a positive addition to the sparse YA literature on foster care.

This hard-to-put-down novel takes on grim topics unflinchingly but also gives readers hope that honesty and kindness will prevail.