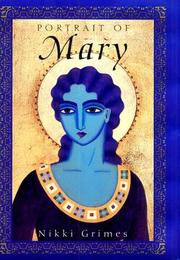 Children's author Grimes (From a Child's Heart, 1993, etc.) does an adult turn with this mild historical fiction about the mother of Jesus. Largely narrated in the first person, the novel tells the familiar story of Mary in a simple, pious way that is sure to please fundamentalist believers. Coming of age in the backwater of Galilee, ruled by the evil and tyrannical puppet-king Herod, Mary is attracted to the carpenter, Joseph, by his muscular good looks and his love of God. She is betrothed to him when she is visited by the Archangel Gabriel, who announces that she has conceived a child by the spirit of God. She envisions opprobrium and rejection as a result of this ``illegitimate'' pregnancy, but Joseph stands by her and vows to keep the matter private between them. Forced to flee to Egypt to avoid the mass infanticide ordered by Herod, they return only after the monarch's death. Jesus, the son she bears, impresses all those around him, and Mary remembers the promise of Gabriel and the old prophecies, but she still doesn't fully understand. Finally, Jesus embarks on a ministry of which she is no real part. She sees him only occasionally and is confused when he spurns her. She watches helplessly as he is arrested and executed. When he is raised from the dead, in fulfillment of the prophecies, Mary, like Doubting Thomas, refuses to believe it until she has seen it with her own eyes—after which she emerges believing and exultant. Passages from the Gospels punctuate the text and serve to give it a homogenized story line culled from disparate parts of the biblical tradition. Attempts to add resonance to the bare-bones account by portraying Mary's inner thoughts are only sometimes successful. Boy meets girl. Girl gives birth to Messiah. Messiah dies. Messiah lives. Enough said.