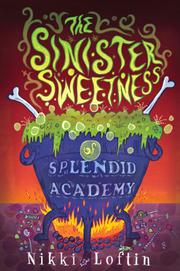 THE SINISTER SWEETNESS OF SPLENDID ACADEMY

A pinch of Grimm, a dash of Greek mythology and a heaping helping of fresh chills make for an irresistible contemporary fairy tale centering around a food enchantment.

A sparkling new school pops up in Lorelei’s neighborhood, and events conspire to make her and her brother enroll. Not that they resist—Splendid Academy has the most phenomenal playground they’ve ever seen, and Principal Trapp lets the kids run in the halls. As icing on the cake, food’s provided constantly, especially desserts. Everyone’s desk contains a magically refilling candy bowl, and the lunches and (oddly non-optional) breakfasts are succulent feasts. Rules barely exist; teachers balk only when a student doesn’t eat enough. Even at home, Lorelei awakens with “a sick, twisting hunger that felt like teeth chewing at my insides.” Readers familiar with "Hansel and Gretel" will smell the reason why these teachers push food. Lorelei is smart, but two obstacles block her: knowledge that “there [i]sn’t an adult in the world who would believe” the preposterous truth at the school’s core, and emotional baggage from her mother’s death a year ago. In clear, accessible prose with a sense of immediacy, Loftin smoothly melds Lorelei’s conviction that she’s “done something unforgivably evil” with the deadly danger hovering at school. Refreshingly, Lorelei’s learning disability (dysgraphia) is simply a fact of life, not a literary symbol.