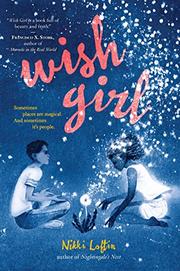 A sensitive boy with a troubled past and an artistic girl whose cache of wishes has almost expired find solace and friendship in a magical valley.

Twelve-year-old Peter and his family have recently moved to rural Texas Hill Country to escape his issues with bullies in San Antonio. Peter’s unemployed father urges him to “toughen up,” while his resentful, overworked mother can’t understand her withdrawn son. An outsider in a loud family that considers him a weirdo, Peter retreats to an isolated valley for solitude. Here he finds Annie, also 12, who’s staying at a nearby camp. “[W]eird and bossy,” Annie’s passionate about art, and she and Peter bond in the valley’s protective atmosphere. Annie calls herself a “wish girl,” but Peter eventually realizes she’s a Make-a-Wish kid whose leukemia has returned. When local bullies terrorize Peter, he opts to run away with Annie, who’s avoiding more cancer treatment, but their escape’s thwarted, and Peter’s forced to speak out. As in Loftin’s Nightingale’s Nest (2014), the first-person narration in lyrical prose adds immediacy to Peter’s and Annie’s life-challenging situations as their transforming friendship plays out in a setting suffused with magical realism.

A moving, mesmerizing story of wishing, listening and hope for discerning readers.