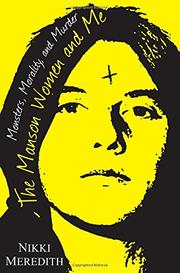 THE MANSON WOMEN AND ME

A personal and professional fascination informs this inquiry into various members of Charles Manson’s family.

In 1996, journalist and social worker Meredith wrote letters of interest to murderers Leslie Van Houten and Patricia Krenwinkel, and their responses sparked a 20-year acquaintanceship that has given the author unprecedented access to these two “Manson Women.” Lively Van Houten, now 68, and a consistently dour, cheerless Krenwinkel, 70, both contributed hours of conversation as the author probed the hijacked psyche of each by a cunning Manson, their sinister detachment from the 1969 murders, and their personal methods of deprogramming from their cult affiliation. Meredith broadens her scope with the inclusion of associated analysis and interviews with Stephen Kay, a prosecutor on the Manson trial, and profiles of followers like Catherine Share, Manson’s core recruiter of young women. (Ironically, both Kay and Share were fellow classmates of Meredith’s in high school). The author’s field research yields mixed results. Her accounts of afternoons spent with Van Houten’s permanently scarred mother are deeply poignant and revelatory, while an encounter with “startlingly manicured” family member Susan Atkins, a baffling visit to Krenwinkel’s dementia-addled father in an Idaho nursing home, or her trek across Death Valley to scrutinize Manson’s former desert outpost are largely unremarkable. More impressive are Meredith’s passionate discussions of psychological influence and cult control, and she ties these themes into her own history of growing up Jewish and facing the ever present specter of anti-Semitism. She also discusses the plight of her brother, who committed armed robbery as a youth and was imprisoned—not far from the women’s facility where Van Houten and Krenwinkel remain today. The author also cogently deliberates on the complicated nature of remorse and how organized religion’s “automatic redemption” still prevents Krenwinkel (and many other wrongdoers) from truly acknowledging her culpability and her loss of humanity.

An overlong and uneven but intermittently fascinating study of human behavior motivated by evil.