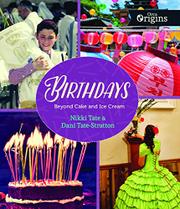 Beyond Cake and Ice Cream

From the Orca Origins series

A survey of birthday customs from ancient times to today’s birthday wishes on social media.

The special feature of this recently launched series is the inclusion of personal reminiscences, some of which are more unusual than others. Here, the mother-and-daughter co-authors have used some of their own, with the most compelling being Tate-Stratton’s memory of spending her 20th birthday in Japan, where she joined in Adult’s Day, Seijin no Hi, wearing an opulent kimono and participating in ceremonies at the local city hall and religious shrine. The origins of birthday customs in ancient Egypt, Greece, and Rome are described, as are celebrations in many contemporary countries. Special ceremonies and parties for specific ages, such as the Latin American quinceañera for 15-year-old girls, Jewish bar and bat mitzvahs (religious coming-of-age ceremonies for 13-year-old boys and 12-year-old girls), and parties for Korean 1-year-olds, are explained. The authors also call attention to birthdays for senior adults, especially in Asian countries. The color photos are excellent, and the text is well-researched (although not much is included on African countries), but the activities scattered throughout the book are less than exciting: a recipe or two (some measurements are only in metric units), a birthday calendar project, a simple game for kids younger than the target audience, and suggestions for thinking about and reflecting on the past year and goals for the next.

The intended audience may find this less interesting than educators and librarians looking for program ideas; nevertheless, a useful book.