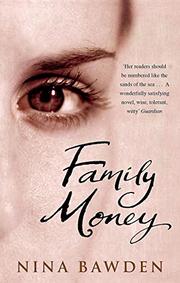 Bawden continues her preoccupation with familial Circles of Deceit (1987), here examining the concerns of middle-aged children for their mother, who has, violently and abruptly, become a problem to he solved--while the mother battles through a thicket of difficulties, alone. There is love, but also sprouting amid the children's loyalty are telltale tendrils of greed and a monstrous self-pity. Fanny Pye, 60-ish widow of a career diplomat, confronted three young toughs who had beaten another man senseless on a London street, and was herself knocked unconscious. Lying in the hospital, with children Isobel and Harry standing by in shock, Fanny can't remember the incident (""memory had its own logic; a code which was hard to break sometimes"")--but she returns to her substantial home (all her husband left her) to reclaim it and herself. Her children worry about a companion. Memory, however--""a dimly seen cloud""--holds a surprise, as eventually floating up from Fanny's store of buried nightmares is a chance remark revealing a nasty crime. Meanwhile, Fanny has been making decisions that give the children shivers. Will she sell the house and give the money to a friend for her house? And what of her single contemporary Tom, who seems to be a permanent fixture? After all, Fanny's house, both children agree, represents ""family money,"" and therefore is not Fanny's to dispose of. (Among friends and neighbors there are echoes of such trans-generational conflicts--with the middle-aged frustrated and harried, and the old careening off in their own way.) Fanny is almost defeated by her secret knowledge of a murder and by her own panic, but she conquers fear, and, in an amusing close, flies off on a holiday plane leaving Harry bothered, bemused, self-deceived, and drawing the wrong conclusions. As in Walking Naked (1981) and Circles of Deceit, Bawden's contemporary truths, laced with a dark humor, fit--and pinch.