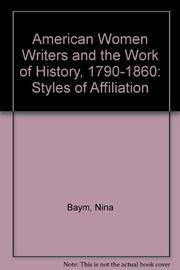 By revealing women's use of history in the making of it, Baym rebuts conventional wisdom about women's absence from national life in antebellum America. Baym (English/Univ. of Illinois, Champaign-Urbana; Feminism and American Literary History, not reviewed) demonstrates that women were active outside the home and in an important kind of antebellum politics. Through extensive archival research of over 350 works (among them pieces of historical fiction, lyric and dramatic poetry, family memoirs, travel narratives, and advice books) written by 150 women of varying degrees of renown, she shows how women (of the upper and middle classes) used the proliferating print media to become ``influential in forming public opinion.'' Indeed, Baym predicts that today's predominant conception of 19th- century American women as non-participants in the ideological tasks of nation-building will, in time, prove wholly inaccurate: ``We may discover in time that representations of female selves as privatized and domesticated beings are actually minority strands in nineteenth-century American women's literature.'' Baym asserts that, from the early days of the republic, women were urged to read history, which was installed at the center of the earliest female curricula. As a result, antebellum women, just like men, deployed ``history'' for argumentative purposes, using it to advance a range of ideas about how things in America ought to be. They reformulated concepts of motherhood and womanhood to include an educational role that accommodated various forms of historical writing by women. Baym's fluid conception of what is historical enables her to explore the development of women's and America's cultural identity with great nuance. Her analysis of material both known and new takes account of the complexity of a national identity forged by both authorities and ordinary people. An elegant account that reveals new dimensions in women's relationship to American history and historiography.