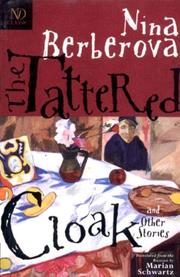 A collection of six novellas, first published in English two years before Berberova’s death in 1993. The Russian novelist and biographer (of poet Aleksandr Blok), born in 1901, spent many of her final years as a professor at Princeton, but the stories here are more reflective of her life as an exile in Paris from 1922 through the early ’50s, when most of these were originally published. As Kirkus noted in 1991, when Schwartz’s translation first saw print (April 1, p. 482): these pieces are “quintessentially Russian in mood and theme.” Berberova’s émigrés find it difficult to adjust to life in Paris; their past lives compete with their present exile—the tales are peopled with history’s victims. Our review commented on the “unrelieved bleakness,” but praised the economical telling and the skillful execution. Still, we found these stories “too cerebral” and “too carefully crafted to move.”