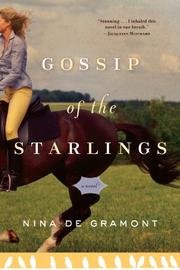 GOSSIP OF THE STARLINGS

Debut novelist de Gramont (stories: Of Cats and Men, 2001) employs an elegiac voice in this memorable if uneven novel based on the plethora of prep school scandals. After she’s caught in bed with her impossibly decent boyfriend John Paul, teenaged Catherine Morrow is forcibly enrolled at the Esther Percy School for Girls, an austere New England institution whose effect is akin to putting all the rotten eggs in one basket. There she develops a life-altering bond with fiery redhead Skye Butterfield, the spoiled but defiant daughter of the region’s Kennedy-esque senator, Douglas. “Some people can’t help but pull you into their messes,” warns Catherine’s former best friend Susannah, and Skye quickly proves it with increasingly erratic behavior. Fueled by a voracious appetite for drugs and attention, Skye joins an environmental protest to purposefully derail her father’s burgeoning political power; is nearly attacked while hitchhiking with an innocent roommate; and viciously tempts Mr. November, an unbalanced male teacher whose wife left because of Skye’s machinations. Any story that begins with its heroines cutting lines of cocaine on a toaster oven can’t end well. But the author inhabits her placid protagonist Catherine and her ill-fated counterpart to dramatic effect. It’s difficult not to like the well-meaning Catherine despite her unwise choices (the urge to wave her away from self-destructive Skye arises frequently). This is especially true during the novel’s denouement, as Skye betrays her one true friend and then pulls her final disappearing act. A subplot involving Catherine’s halfhearted pursuit of an equestrian championship is distracting, as is Susannah’s wildly improbable scheme to smuggle drugs from Venezuela to New England with the help of a dim-witted boyfriend. But when de Gramont focuses her gaze on her naïve, doomed muses, the book soars.

A transfixing confessional about the secret lives of dangerous girls.