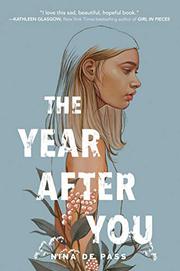 THE YEAR AFTER YOU

A grieving young woman finds help at a Swiss boarding school in this realistic novel.

Seventeen-year-old Cara arrives at Hope Hall feeling as if she’s been flung as far as possible from her previous home near San Francisco. Months earlier, a car accident, in which she was the driver, killed her best friend, G, and left Cara struggling with anxiety and agonizing in a deep well of self-blame. She’s surprised and touched, if wary, that her new roommate, Ren, is patient and empathetic, and Cara is reluctantly drawn into her tight, complicated friendship with Fred and Hector, two other students. There are poignant and genuine moments in Cara’s introspective first-person narration, and many readers will enjoy the idyllic setting in the mountains of Switzerland and the pan-European cast of characters: Cara lived in England before her parents’ abrupt divorce led to her mother’s marrying an American and fleeing the country, Hector is Spanish and English, Ren is French, and Fred is Swedish. They are all white; Ren is also gay. Cara’s experience of her grief is realistically messy, but some readers will find its blending with a romance with Hector too pat and the slow build of her coming to terms with the actual events leading up to G’s death too melodramatic.

An engaging, at times moving, debut that doesn’t always quite ring true. (Fiction. 12-18)