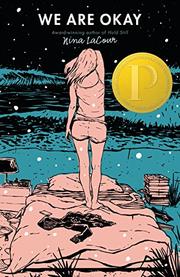 “If only lonely were a more accurate word. It should sound much less pretty.”

It’s December in New York, and college freshman Marin is in her dorm room, contemplating a solitary monthlong stay after everyone else has left for winter break. Her single respite will be a brief visit from her best friend, Mabel. Marin is dreading the stay for reasons that are revealed in flashbacks: she fled San Francisco without informing anyone after the sudden death of her beloved Gramps, who raised her. Over the course of three days, secrets about Gramps, Marin’s long-dead mother, and the girls’ complicated relationship are revealed in short, exquisite sentences that evoke myriad emotions with a minimum of words. “I must have shut grief out. Found it in books. Cried over fiction instead of the truth. The truth was unconfined, unadorned. There was no poetic language to it, no yellow butterflies, no epic floods.…The truth was vast enough to drown in.” A surprise arrival at story’s end leads to a tearful resolution of Marin’s sorrow and a heartfelt renewal of her relationship with Mabel and her family. Mexican-American Mabel speaks Spanish, while an absence of markers indicates Marin is likely white.

An elegantly crafted paean to the cleansing power of truth.