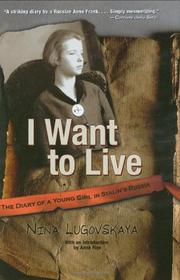 I WANT TO LIVE

The Diary of a Young Girl in Stalin’s Russia

Lugovskaya began her diary about her life in Moscow in 1932 when she was 13. She continued writing about her activities and thoughts until 1937 when she and her family were raided by Stalin’s secret police. The title does not refer to life in Siberia, but about everyday events and her adolescent angst at school and home, her social life, her friends and her frequent comments about wanting to commit suicide. Nina is endlessly in and out of love and worries about her appearance since she is self-conscious about an eye condition (a crossed eye). Readers can see what life was like under Stalin, and they will learn about the Soviet school system and the social life of young people. But will they care? The diary has been compared to Anne Frank’s, but that is neither correct nor apt. Lugovskaya was not hidden nor did she perish when the family was sent to Siberia. Explanatory notes are added to some entries, which might help readers. Includes photos and a reading list. (Biography. 12-15)