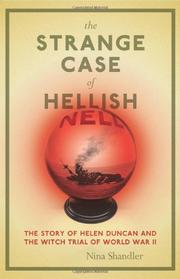 THE STRANGE CASE OF HELLISH NELL

A Scottish psychic is charged under Britain’s Witchcraft Act of 1735 as the Allies prepare to launch the D-day invasion.

Psychologist and family therapist Shandler (Ophelia’s Mom, not reviewed) recounts this unlikeliest of tales in brittle, colorless prose that diffuses much of its drama. Nell Duncan, an overweight mother of six whose two sons were off fighting Hitler while she was on trial, never really comes into focus as anything more than a pathetic oddity. Nor is the book’s readability helped by the author’s habit of skipping abruptly back and forth from Duncan’s days as a young tomboy romping through Edinburgh to her adult years as a controversial medium continually hounded by skeptical psychiatrists and authorities. Duncan’s psychic powers surfaced early but didn’t provide escape from a generally sad life. She was thrown out by her mother after bearing a child out of wedlock and lost an infant daughter. Saddled with a feckless husband and growing family, she resorted to performing in public. Séances and spiritualism were wildly popular in war-torn Britain as grieving relatives tried to contact the soldiers dying daily on the battlefield. Duncan had a history of revealing secret ship movements while in a trance, so when she began giving séances in the harbor town of Portsmouth on Jan. 14, 1944, local authorities feared she would divulge the pending D-day invasion, slated to be launched from a nearby port. Much of the story revolves around her nine-day trial. Duncan’s attorney called no fewer than 39 defense witnesses, each of whom testified that she produced the talking ghosts of their departed loved ones through a spirit guide named Albert. Shandler never addresses the credibility of these accounts (didn’t anyone ever think to bring a camera?), and we can’t help but feel that the whole truth eludes us.