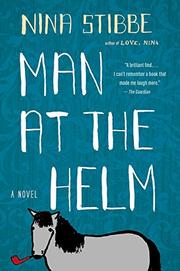 MAN AT THE HELM

Divorce leaves an unreliable mother and her three concerned children adrift in an unfriendly village in this first novel from Stibbe, whose memoir (Love, Nina, 2014) was an acclaimed comic debut.

Narrated in a naïve yet confident voice by 10-year-old Lizzie Vogel, the middle child, the book traces an unconventional family’s progress after marital derailment in 1970s England. Filtered through Lizzie’s idiosyncratic perspective, the sad and serious prospect of a household falling apart as the mother struggles with loneliness, depression, drink and pills shades away from tragedy toward the absurd. The family relocates from comfortable suburbia to a new village home where Lizzie and her sister find themselves not only unpopular, but also, they fear, in danger of being made wards of the court. While attempting to take care of their mother, they decide their job is also to find her a boyfriend, a new man at the helm to steady and safeguard the ship of family. Making a list of local candidates, with no concern about whether they're already married or not, the girls set up romantic encounters by writing letters in their mother’s name. The results are predictably chaotic. Ridiculous episodes, like a pony climbing the stairs, are interspersed with more perturbing developments, including financial disasters and the nervous problems of younger brother Jack. And yet, despite increasing poverty and the move to another, smaller home, the family's fortunes eventually shift, with the helm being taken by a man almost as eccentric as the Vogels themselves.

Charming and bittersweet, with a very English flavor, this social comedy is distinguished by Stibbe’s light touch and bright eye.